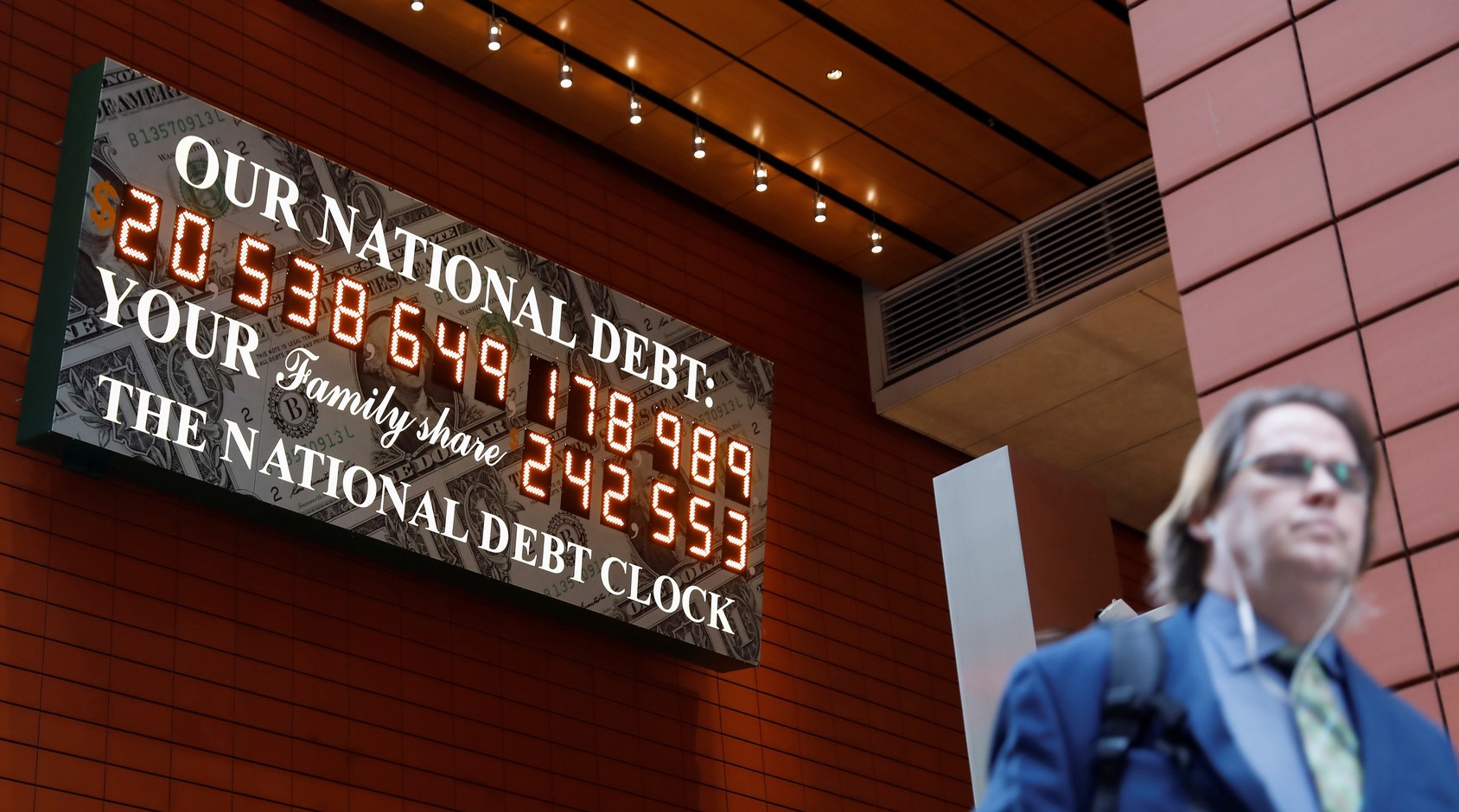 A stone’s throw from the Lincoln Tunnel in midtown Manhattan, New York, sits a large electronic sign. Perched high up along West 43rd Street, it is hard to miss the ‘US National Debt Clock’ which displays an ever-inflating figure with an ominous implication. In 1843, Abraham Lincoln himself described government debt as “a system not only ruinous while it lasts, but one that must soon fail and leave us destitute”.

During the 20th century this popular anti-debt ethos was overtaken by a Keynesian one. The British economist John Maynard Keynes advocated the need for governments to spend their way out of depressions, even if that meant borrowing to do so.

One glance at the habits of governments over recent decades suggests the pro-spending, pro-debt approach has been widely endorsed. Even before the Covid-19 pandemic, amassing public debt was not a new phenomenon on either side of the Atlantic. These debt piles were growing steadily until a marked acceleration during the 2008 recession and beyond. The economic impact of the coronavirus crisis has been widespread and severe. Unparalleled levels of government spending, intended to ease the shock, have led to a huge surge in sovereign debt issuance. Expectations are now for debt-to-GDP ratios in developed economies to match levels not seen since WWII.

Which, as UK debt levels hit £2 trillion for the first time ever and the US passes its own $27 trillion milestone, raises an important question: do these eye-watering, almost incomprehensible figures matter?

Why we have debt

The basis of traditional monetary theory is that governments take in money through taxes – their revenue – and spend it on areas like social welfare, healthcare and defence. Often the government doesn’t have enough to spend on all these programs at once, so it needs to borrow to cover the shortfall. This is also known as a government budget deficit.

It primarily borrows money by issuing bonds. Investors and central banks buy that debt and get a return when the government pays interest on those bonds. The main owner of US and UK debt is the public (including private financial institutions) with foreign states a close second.

Crucially, economists are still divided as to whether the mounting debt delivered via this mechanism is sustainable.

Why debt may be problematic

In the short-term, the economy and households benefit from higher spending because it can boost economic growth. Classical economic theory argues that maintaining large and persistent deficits is unsustainable over the long-term. It creates a weight of indebtedness that becomes hard for taxpayers to bear, compromising the living standards of current and future generations.

Left unchecked, the cost of servicing the debt may spiral out of control leaving the government struggling to meet debt repayments. This could lead to sharp rises in taxation, or cuts in spending. And if the government’s solvency is called into question, there could be a run on the national currency or the refinancing existing debt may become impossible.

The World Bank recently summarised its view, stating “Those who have historically worried about the debt have framed it in aggregate terms… But the key question is not the aggregate size of the debt or the deficit, but its size in relation to the economy and the ability of a given country to service it.”.

Some economists predict rises in government spending will have an impact on inflation as it drives up demand in the economy. When that economy is nearing full capacity (for example if unemployment is low) there could be an even greater impact on inflation, creating a rise in prices and instability.

There are signs that today’s massive debt levels are likely to keep growing. Demographics can also explain why debt has, and may, keep growing. The populations of many of the major economies are ageing. The ratio of people paying into state coffers and those taking payments will decline.

Over the next three decades it is expected that 74 million Americans will reach retirement age – the equivalent of ten thousand people per day.

For others, the scale of debt is a matter of fairness: is it fair, at a time of declining social mobility, to burden future generations with the debts that we have accrued?

Economists and politicians are divided on whether spiralling debt matters. Those who believe a debt crisis looming warn that countries will be so heavily indebted at the next crisis that they will be unable to spend their way out of crisis again – a more sustainable approach is needed. But not all are convinced by this stark prognosis.

Why the debt doesn’t matter

These arguments leave a few questions unanswered, such as why economies like the US have thrived, even as deficit and debt records have been set year after year, decade after decade. If there is a ticking time bomb, why has it remained dormant?

Many economists agree that taking on debt makes sense when the economy needs a boost. The 1940s post-war era saw borrowing reach new highs. The response to coronavirus is likely to see debt reach close to those extraordinary levels again.

Proponents of the Keynesian approach challenge the argument of affordability. The cost of debt is not fixed – right now debt is cheap. And it’s also a time where we are likely to get a high return on re-investing the debt back into the economy. Evidence from the US economy suggests that the economic return on borrowing has been rising faster than the cost of debt.

To take an example, in 2021 a UK gilt (a government bond) worth £24 billion will reach its maturity. The coupon (or interest rate) was set at 8% on issuance in 1996. The gilt has been costing the government £2 billion per year, payments which will cease next year. In October 2020, the government issued £37 billion of new gilts at an average rate of c. 0.5%, fixed for an average of 13 years. The resulting annual interest is just £185 million. Put another way, compared to 1996, the government was able to borrow eighteen times more at a tenth of the cost.

Fundamentally, there are broader questions around the significance and nature of government indebtedness. Economist Stephanie Kelton argues in her recent book, The Deficit Myth, that the entire concept of states relying on taxation revenues to fund spending is flawed. In fact, the reverse is true: governments spend first, then decide how much taxation or borrowing is required to control inflation and interest rates.

Kelton contends we should move away from seeing the government budget as equivalent to a household budget. Instead, consider the central tenet of Modern Monetary Theory (MMT): in countries where the state  has control of the unit of currency used by the public (like the US, UK and Japan), there is nothing to prevent it creating any amount of that currency to spend on interest.

From this perspective, governments with monetary sovereignty can never go bankrupt, unlike households or businesses. Recently, the Greek debt crisis of 2010 illustrated the importance of monetary sovereignty. The austerity measures which followed the Credit Crunch wreaked havoc on Greek finances but, as a member of the Eurozone, money supply is not under national control. Unable to print more euros, Greece came close to catastrophical